Hip dysplasia refers to a syndrome in which malformation of the hip joint occurs during development. The end results are arthritic changes and remodeling in the joint, which may lead to substantial disability and pain, particularly as the dog ages. There is considerable variability in the degree of difficulty individual dogs experience. Some with very poor x-ray results have few, if any, mobility problems, while others, with seemingly mild arthritic changes, experience more severe symptoms.

There are a variety of treatments available. Many dogs do well with conservative treatment—e.g., a variety of pharmaceuticals, such as Adequan® and glucosamine/chondroitin, as well non-steroidal anti-inflamatories (e.g., Rimady®, Previcox®, Ascriptin®, buffered aspirin). Other dogs with more severe disabilities may be candidates for surgical intervention, up to and including total hip replacement. None of these approaches is without the potential for problems, and it is important to have the advice of a veterinarian familiar with giant breeds, your dog’s breeder, and, if indicated, an orthopedic specialist, It is quite clear that there is a genetic predisposition for hip dysplasia in some dogs, though there is also an environmental contribution. Inheritance is usually described as “polygenic” meaning that at least several, and possibly many, genes contribute to the vulnerability, and parents with clear hips can produce offspring with dysplasia.

Elbow dysplasia, technically, like hip dysplasia, is the abnormal development of the joint. Un- like hip dysplasia, elbow dysplasia is thought to result from one of three distinct syndromes— fragmentation of the medial coronoid process (FCP), ununited anconeal process (UAP), osteochondrosis dessicans (OCD)— all of which can result in secondary arthritic changes and mobility problems. Like hip dysplasia, all apparently have a substantial, but distinct, genetic component, and breeders are dependent on the evaluation of x-rays to determine the status of dogs prior to breeding, since clinical signs may occur at a later age. Full expression of any of the three disorders may require surgical intervention.

Though other cardiac problems (e.g., patent ductus arteriosus (PDA), pulmonic stenosis, dilated cardiomyopathy, valve dysplasia) occur in the Newfoundland, the one of most concern is subaortic stenosis in which a ring of tissue encircling the descending aorta creates increased velocity and turbulence of blood flow. In its severe forms, it is a serious, sometimes fatal, problem and breeders generally have breeding stock evaluated by a cardiologist. Although any ambiguous finding with auscultation (stethoscope) is usually followed with an echo-cardiogram, many breeders believe all potential breeding stock should be checked with an echo-cardiogram, which can provide a much more definitive diagnosis.

Although the genetic component is as complex as that of hip and elbow dysplasia, with careful screening, a large majority of problems can be detected in puppies by 10 to 12 weeks of age. Many Newfoundland breeders are reluctant, therefore, to place puppies before this age. As with hips and elbows, it is possible that two “clear” parents can produce affected offspring. Regardless of age, heart evaluations should always be done by a Board-Certified cardiologist.

Cystinuria is a urinary disorder in which the dog is unable to resorb the amino acid, cystine, from the urine. The resulting increases in urinary cystine concentration may result in stone formation. This can have potentially fatal consequences, particularly in males.

Unlike the other health problems, the inheritance of cystinuria is straight forward. Further, to some extent because of this simplicity, there is a genetic test available, which directly detects the mutation that causes the disorder. Since use of this test allows breeders to detect carriers of this recessive gene, breeders can avoid ever producing this disease. 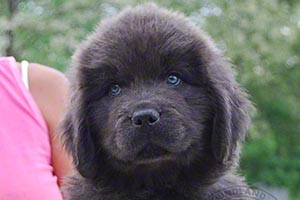 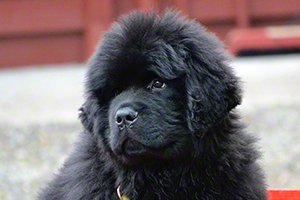